Divided into four parts, and prefaced with a personal essay where the author
explains his relationship with the English language,
Painting That Red Circle White is the debut collection containing thirty seven poems. 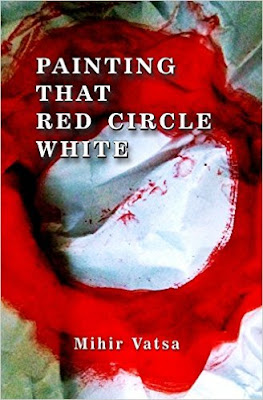 I had this book with me from 2014; in fact I completed reading it back then itself and decided to write a review. But then I drifted apart from writing, I did not wish to write, something that's been happening with me from the past 2 years, on and off. Finally I decided it's high time I return to writing and what better than to start with penning down a review that was in drafts for two long years and is finally seeing the light today.

I have always wondered why classic literature is amazing. Over the years I've come to a personal conclusion it might be so because much of it is not fabricated like fiction. The authors and poets felt the emotions they penned down.

We don't see writings like that these days, even if it's there it's rare.  On such example is Mihir Vatsa's poems. The first time I read him dates back to almost around 2012. Back then I had no idea that four years later I would be reviewing his work in paperback. 'Painting That Red Circle White' is a collection of poems divided in four parts each having a theme and a personal essay at the opening.

The poems they talk, they talk of him and through him. They talk about the places he grew up in and how they moulded him. I have never been to Hazaribagh yet I feel I've traversed through it like an invisible ghost eyeing the things hidden behind words. The subtle undertones that weave the words and takes the reader to a surreal realm where none but the words exist.

There are no two poems that are comparable to each other, you cannot compare one to another. Each one has its own essence and the more you read the more intriguing they become. It is neither the language that is mysterious nor the plot, it is the feeling the diverse emotions they evoke in you every time you read them. Some you relate to while some leave you in awe.

There are some poems that captivated me compelling me to read them over and over; 'Ice', 'Things Which Aren't Ours', 'In Other Words', 'The Thing about Silence', and 'Touch'.

Words and poems are simple, just like life and Vatsa makes his point clear with his marvellous debut! All you need is a taste for the simpler but good things in life.

A must read if you long for good modest and gripping Indian poetry.

P.S: You can also check out the review here,
r4review.com
Goodreads
Posted by Fatima at 14:06

Fatima
Know me to Know Me !